Step by step instructions on creating a poster; general tips and ideas for poster design

Your time spent planning tends to pay off many-fold compared with trying to plan and create at the same time.

Planning can be straight forward: write down the key points you want to include and how you will lay them out on the poster.

This is a standard layout for poster.  The title is centered across the top with the other elements in either three or four columns similar to a newspaper.  Traditionally, posters are read left to right, top to bottom.  Charts are often placed in the middle.

That said, there are variations in layout.

The above are only guidelines. When you have completed a draft, take a look at your font sizes and tweak them as needed to make them look good.
Generally speaking, titles and headings should be bold. Text should not be bold.

NOTE that this layout doesn't show use of white space. 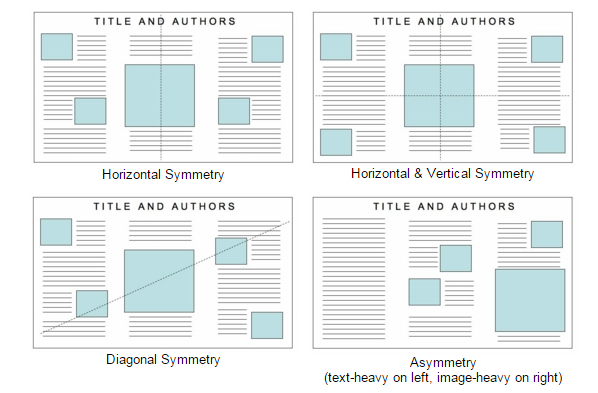