This guide is intended for academic research in legal resources by University of South Dakota graduate and undergraduate students from colleges and schools other than the School of Law. The information in this guide is not intended as legal advice.

Introduction to the Courts and Case Law

The most efficient method of locating cases on a topic is to find case "citations" in legal encyclopedias, law reviews and law journals, and statutory annotations. Court opinions, or "cases," are published chronologically in series of books known as "reporters."

A complete case citation includes the case name, all reporters where the case appears, court, and year:

How to Find Legal Sources in LexisNexis Academic Universe

LexisNexis Academic Universe is a USD database containing primary and secondary legal sources. Click on the arrow by "Search by Content Type" to open a drop-down box. Choose one of the categories under "Legal."  The legal encyclopedia, American Jurisprudence 2d, is located under Legal Reference. Additional legal sources can be found through the "Source Directory" at the top of the page. Click "Browse." The folders labeled "Administrative Materials and Regulations," "Legislation, Statutes and Codes," and "Treaties and International Agreements" contain many additional resources. 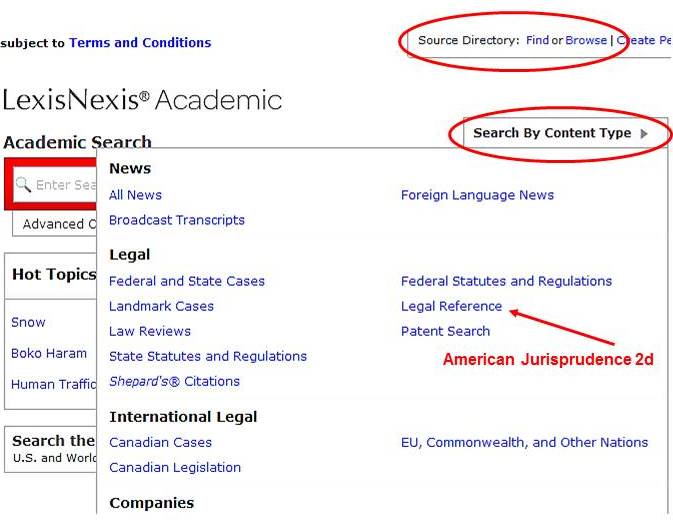